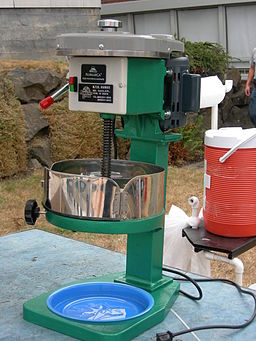 The difference in consistency and surface area of the ice particles allows for significantly different uptake and retention of the flavoring snow cone syrup. Because of these differences and as an homage to Ernest’s ingenious method, traditional block ice shavers are often referred to as New Orleans style. Ernest’s family continues to work in the snow cone business to this very day.

Yet another variation of the snow cone originated in Asia, where shaved ice desserts have been popular since the 19th century. When Japanese immigrants came to the Hawaiian islands to work in sugar and pineapple plantations, they brought this confection with them, using hand-operated steel blades to shave the ice in a method very similar to Ernest Hansen’s. The treat quickly became immensely popular throughout the islands, where the tropical temperatures ensured “shaved ice” sold all year. But earlier these shave ice were sold only on Sunday which was the weekly off for the Japanese plantation workers. They use to shave ice and pour fresh fruit juice over it. After the Japanese left the plantations, they took up other professions like grocery stores,etc.  By this time shave ice had become immensely popular and a par of Hawaiian culture. The shave ice became commercial and was being sold everywhere as a refreshing icy treat.

Hawaiian shaved ice cones are known for the ice’s extremely fine–near powdery–consistency, as well as the unusual flavor combinations used: typically, tropical fruit flavored syrups are used, with many variants including a scoop of vanilla ice cream or Japanese azuki, a red, sweet bean.

Hi there, I’m Richard Parker! I own two food truck businesses in Hawaii, selling snow cones, gelatos and frozen drinks. I’ve been working with ice makers for most of my professional career, and created this website to pass on my knowledge. I hope you enjoy!